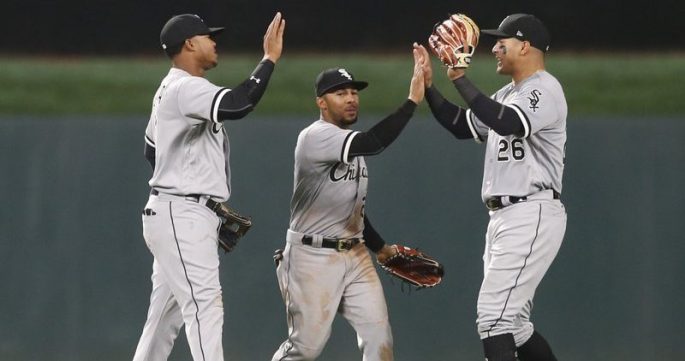 Tres Garcías: On this day in 2017, the White Sox outfield made history. (@WhiteSox)

1910
White Sox pitcher Frank Smith fired what remains the franchise’s only Opening Day one-hitter as he beat the St. Louis Browns in Chicago, 3-0. Smith would later go on to pitch for the Red Sox and Reds.

1917
White Sox pitching star Eddie Cicotte no-hit the St. Louis Browns, in a 11-0 laugher. The game was at St. Louis and remains the earliest no-hitter ever thrown by a Sox pitcher in a season.

1942
Because of the intervention of President Franklin Roosevelt, Major League Baseball continued during World War II. The Sox would lose to St. Louis, 3-0, this Opening Day and according to the reports of the time it was a very quiet, somber crowd. Marines and sailors marched in carrying the American flag from center field. Pearl Harbor was still etched in everyone’s memories.

1955
The White Sox and Sandy Consuegra defeated the Kansas City Athletics, 7-1, in the Comiskey Park home opener. The game was the first-ever between the Sox and the Athletics since the A’s move from Philadelphia to Kansas City. Sandy went the distance, allowing only three hits.

1964
The bittersweet 1964 season began with the White Sox dropping a 5-3 decision to the Orioles in Chicago. Hoyt Wilhelm gave up three late runs to lose the game. The 1964 Sox would win 98 games … only to finish one game behind the Yankees for the pennant.

1981
In the home opener for the season and for new owners Jerry Reinsdorf and Eddie Einhorn, 51,560 fans poured into Comiskey Park to see the new faces and new attitude. The Sox put on a show in blowing apart Milwaukee, 9-3. The big blow was Carlton Fisk’s grand slam into left-center in the fourth inning off of former Sox hurler Pete Vuckovich.

2017
The White Sox started an all-García outfield at Minnesota, marking the first time in major league history a team’s three starting outfielders all had the same last name. All three collected hits, including Willy García, who doubled in his first big-league at-bat in the second. He played left field, with Leury García in center and Avisaíl García in right. The Alou brothers all played in the outfield for San Francisco in 1963 a few times, but all three never actually started a game together. The Sox won the contest, 2-1.