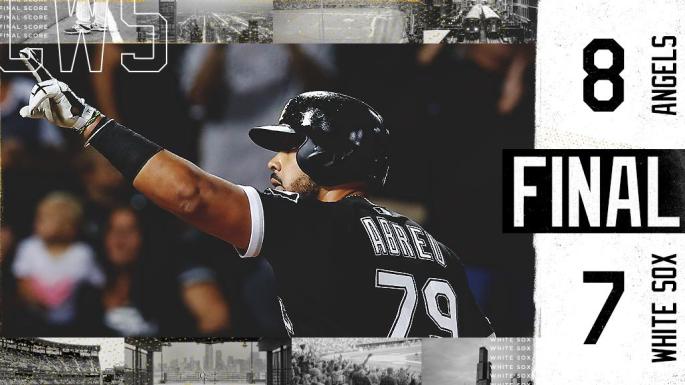 José hits back: Abreu’s thrilling 7th inning home run after being plunked all night was poetic justice, but not enough to rally back from what was a five run deficit

Shohei it ain’t so? A rocky start from Dylan Covey, some continued rockiness from the bullpen, and an offensive onslaught by Shohei Ohtani and *squints* … Kevan Smith? The Chicago White Sox fell to the initially Mike Trout-less Los Angeles Angels on Saturday night at Guaranteed Rate Field, 8-7.

The first inning kicked off with back-to-back leadoff singles from David Fletcher and Brian Goodwin. Here, Ohtani gave us a brief demonstration on how he’d hurt us later by smacking a line-drive double to left field. Goodwin and Fletcher both scored; and a throwing error by Tim Anderson allowed Ohtani to jump on over to third to make it 2-0, Angels.

In the Sox’s half of the first, they bit back against Angels starter Andrew Heaney. TA redeemed himself for that first-inning error with a leadoff single. I’d like to officially introduce the TA Batting Title Watch: After today’s game, his average currently sits at a league-leading .333 and just one point off of leading all of baseball!

So why was Luis Rengifo playing to the left of second base? That’s what Anderson was wondering, at least. Yoán Moncada singled to right; with a gustatory headfirst slide, Anderson found himself at third, some great baserunning on his part. José Abreu tapped a sac fly, scoring TA, and giving Abreu a career-high 108 RBIs.

Is this … what they call … small ball?

Moncada stealthily swiped a bag under the watch of Kevan Smith; not quite done with the inning yet, James McCann smacked a double off Heaney to the gap, tying it up, 2-2.

The tie game would prove to be ephemeral; in the third, Goodwin coaxed a dreaded leadoff walk, then advanced on a wild pitch from Covey. A single from Upton pushed Goodwin to third … and …

Shotoshop? How the hell did I not come up with that? Covey left a pitch high and over the plate, and Shohei Ohtani Adobe Acrobated it the hell to opposite.

We saw a single from Albert Pujols (wait, that guy?) and Rengifo walked; and that’s when the Dylan Covey experiment ended, and the Carson Fulmer era began. Fulmer’s control was … not there … from the get-go. He issued a walk to Smith, loading the bases. Did I mention Fulmer had no control? He issued another walk to Fletcher, pushing home Pujols to make it 6-2, Angels.

If Fulmer’s ability to throw strikes was completely eviscerated by clicking the “decline” button on a Creative Cloud software licensing agreement, we saw it tonight. Another wild pitch scored Rengifo, and the game seemed out of reach at 7-2.

Though it’s irrelevant to the eventual outcome of the game, I’d like to mention that Abreu was hit with a pitch in the bottom of the third. Why that’s important? You’ll see.

The White Sox finally show some life in the bottom of the fifth; Ryan Cordell hit a stand-up double on a Heaney slider and scooted over to third on a wild pitch, as there were many of them tonight! And in accordance to the TA Batting Title Watch, I’m required by the law I just made up to tell you about his RBI DOUBLE! Now with multiple hits in 21 oh his last 34 games.

The inning ain’t over yet; that sweet 1-2-3 of today’s Sox lineup finally gets to Heaney as Moncada singles, scoring Anderson and trimming the deficit to 7-4.

(Oh yeah. Before the end of the inning, Abreu gets hit with a pitch again, this time square on the knee. What the hell. Anyway, I swear to GOD this will be relevant later.)

In the seventh, we saw this cool play by José Ruiz, who gets the glove side of an Ohtani line drive:

It’s here in my notes where I wrote something along the lines of “Ruiz is cruising,” which is hilarious since that evaporated as fast as #OldFriend Kevan (why not Kevyn or Kehvyn?) Smith could spank a single shot on a high fastball. It was only his fourth of the year, believe it or not, even though you’d be under the impression he’s … contending for a batting title, he’s such a Sox killer.

Moncada grabbed himself another multi-hit game, singling after taking a foul ball right off of his foot. Ouch. Goins moves on over to third. (Those errors will haunt you, Kevan.)

So I’ve been talking throughout this recap about José Abreu’s HBPs and why they matter.

Here’s why. Abreu finds his pitch, and he finally HITS THE F**K BACK. He finds a Luis Garcia fastball and absolutely crushes this pitch to left field.

There are more ninth inning dramatics, and not exactly the kind you’d want. Simmons singled on one out; Kelvin Herrera balked Simmons to second. His toe must be feeling better, because Mike Trout entered the chat in a pinch-hit appearance, only to be issued an intentional walk. Unfortunately, an unintentional walk likewise is issued to David Fletcher.

With the bases loaded, Herrera managed to get out of the jam with no further damage, which was cool to see.

The White Sox bottom of the ninth failed to yield any run production. And despite Abreu avenging himself and Kevan Smith’s Revenge-Revenge defensive errors sort of costing him, the Sox take a big ol’ L. They’ve now lost the last 10 of their last 12 games, and I honestly can’t even remember the last time I’ve recapped a win. The precarious fifth starter situation was never meant to be a long-term solution, and that proved to be the case tonight, especially against a fantastic hitting Angels lineup.

Dylan Covey went 2 2/3, giving up seven hits and five runs, all earned. He walked two and struck out four, falling to 1-8.

Even though this was another disappointing loss, some cool things to come out of this game: Abreu is at 30 home runs for the season, for the fourth time in his career. He also leads the AL in RBIs, with 111. Anderson still sits atop the American League in batting average. Also, Kevan Smith’s defensive error. Did I mention that?

Heaney went six innings, giving up six hits and four runs, all earned. He struck out eight, and improved to 4-4.

Yeah, there we go.

Tomorrow Dylan Cease, (3-7, 6.75) squares up against Jaime Barria (4-7, 6.27). For your SSHP coverage, look no further than the analytical Joe Resis. Catch the 1:10 CST conclusion of this series televised on WGN; to bring it into your ear holes, dial into WGN 720.