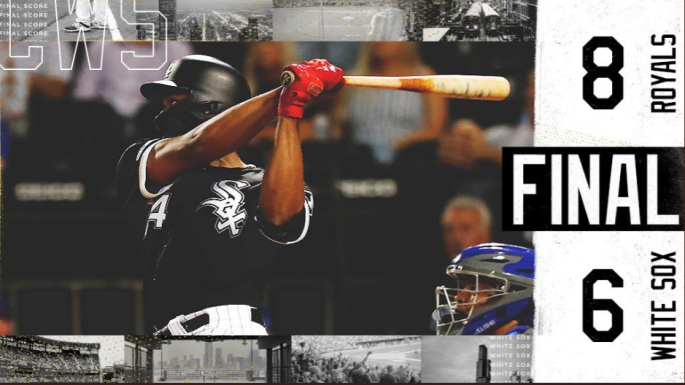 Deja vu all over again! Eloy hits another first-inning moonshot but the Royals hit bunch more and hold on for the W. (@whitesox)

Author’s Note: WordPress crashed on my laptop not once, but TWICE as I tried to do this recap. The first time I had about 75% done before it wiped out. The second it crashed just as I was typing literally this same Author’s Note bit! So I’m pretty pissed. Anyway, I’m tired and it’s time for the Inaugural Bulletpointed Sox Recap Speed Round!

Giolito pitches tomorrow. He is good. Tim Anderson is hitting .333. That is also good. I’m switching to typewriters. Good nigh….Z-Z-Z-Z-Z-Z….

Power to the People: Between the two ball clubs, there were three, two-run blasts late in the game. (FanGraphs)

The White Sox’s late-inning blasts are not enough against Cleveland in a suspenseful, drama-filled ending

After a promising to finish to last night’s ballgame, the Chicago White Sox couldn’t carry over their offensive heat into tonight’s baseball game. Instead, Cleveland found the power and ran … until the Good Guys took the power back in the late innings! Unfortunately, the Sox’s power wasn’t enough — and a straight-up robbery by Oscar Mercado certainly did not help — in this 8-6 loss to Cleveland. Although it’s not as much fun to look at the numbers after this almost-win turned loss, there still is a lot of good to come from the game.

In his first major-league at-bat, Danny Mendick — leading off the top of the ninth inning — struck out. But have no fear, Mendick has a whole lot of upside that he has to showcase for the month of September.

Now, the good. A pair of three’s wrote the story for Tim Anderson and Eloy Jiménez. Both players reached base twice via the single and double. For the third time of the night, Eloy reached on a hit-by-pitch in the eighth. TA7 showed some STICK TALK with a two-run blast in the ninth for his third hit of the night!

Okay, back to the bad. In their last nine games, the Good Guys have dropped eight of them. Of course, the team does not have any playoff implication, but this needs to be addressed. Abreu has the team contending in 2020, so this team must learn how to consistently win. The South Siders definitely know how to win, but a few ( or a lot, I wouldn’t mind) substantial winning streaks (four-plus games) would be nice to have throughout the next season.

Some good! José Abreu continued to rake. TA7 on first and nobody out during the top of the eighth inning, Mal Tiempo launched his 29th home run of the season to left-center field! Bonus Stat: That was Pito’s 400th extra-base hit of his career!

A little bit of both: Eloy Jiménez, our beloved No. 74, is awarded another stat in this Six Pack. Unfortunately, not in a beneficial way. With one out and bases loaded in the ninth inning, Eloy crushed a ball just to the left of center field, but Oscar Mercado made a miraculous effort to catch the sinking ball on the fly. Had that ball dropped, it would have been a bases-clearing double to give the White Sox a 9-8 lead. With a tip of The Big Baby’s batting helmet, Eloy will remember this moment and will capitalize on it in the future.