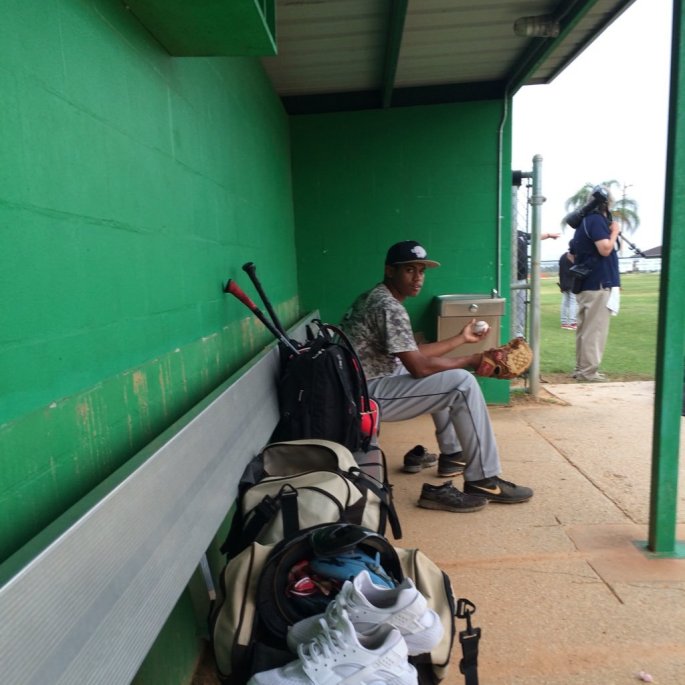 Coming into focus: The southpaw is another hunch that’s playing out wonderfully so far for the White Sox. (@SammyFP16)

Sammy Peralta, a native of Queens, was a well-traveled collegian who pitched for San Jacinto CC, Palm Beach State College and Division II powerhouse University of Tampa. Other than a high walk total that caused his ERA and WHIP to balloon a bit, he supplied his Spartans enough strikeouts to entice the White Sox to select him in the 18th round of this year’s draft. In 2019 for Tampa, Peralta posted a 4.93 ERA and 1.38 WHIP in 22 appearances (42 innings) by allowing 33 hits and 25 walks (13.2%) while striking out 74 (38.9%). Excluding his first four outings, he was terrific over his final 34 ⅓ innings, posting a 2.62 ERA and 1.08 WHIP during that span.

After four outstanding appearances for the AZL White Sox this year, in which he allowed just three hits and two walks in 6 ⅓ innings while striking out 13, Peralta was promoted to Great Falls on July 4. Peralta continued his mastery of rookie league hitters with the Voyagers, as he kept his walks and hits down while striking out 45 hitters in just more than 30 innings. Combined with both teams in 18 outings spanning 36 ⅔ innings, Peralta compiled a 1.96 ERA and 0.95 WHIP by relinquishing just 25 hits (.182 OBA) and 10 walks (6.7%) while fanning 58 (38.7%). When hitters made contact off him, they hit grounders over 43% of the time. While lefties hit Peralta at a .250 clip this year, he held righties to a .165 average.

In addition to a fastball which he uses to set up hitters, Peralta features a wipe-out curveball and changeup to help put them away. Peralta is likely to begin the 2020 season with Kannapolis.

Whompin’ and whumpin’: Mendoza cooled in the second half, but his bat is for real. (Phrake Photography/South Side Hit Pen)

Harvin Mendoza was one of four players acquired on International Signing Day in 2015, along with infielder Brayant Nova, Franklin Reyes and some guy named Fernando Tatís Jr. At the time of the signing, Ben Badler of Baseball America said, “Mendoza is limited to an outfield corner, but there were scouts who liked his left-handed swing, ability to use the opposite field and hang in well for his against left-handed pitching.”

Mendoza has the projectable size to hit more homers going forward, as he is quite a bit larger than his official 175 pounds. Expect him to begin next season with Kannapolis.

Spinning wheels: If Weaver can make better contact, speed will become an even bigger factor in his game. (@GFVoyagers)

Caberea Weaver was an amazing athlete out of South Gwinnett, Ga. In fact, Perfect Game ranked him as the 14th-best high school outfielder in the 2018 draft class in part due to his projectable bat and running the 60-yard dash in 6.27 seconds on a slow track. Baseball America said of him at the time of the draft, “He is an athletic, wiry outfielder with impressive athleticism that should allow him to become an above-average defender in center field. There is a lot of rawness in Weaver’s current game, both offensively and defensively. At the plate, Weaver has a whippy, quick bat and present strength that should continue to improve as he fills out.” The White Sox selected him in the seventh round, and it took a $226,200 signing bonus to pry Weaver from his commitment to the University of Georgia.

Weaver has shown good range in the outfield, with just two errors in professional ball thus far. He was nearly 17 months younger than his competitors in the Pioneer League, so it wouldn’t be out of the question if Weaver returned to Great Falls. However, it seems likelier that he’ll begin the 2020 season with Kannapolis.

Fast-moving delegation: Delgado, still very young, should get his first taste of full-season ball in 2020. (Phrake Photography/South Side Hit Pen)

Lency Delgado, a native of Miami, played his varsity ball with Doral Academy prior to being selected in the fourth round of the 2018 draft by the White Sox. After receiving an over-slot $525,000 bonus that pried him from his verbal commitment with Florida International, Delgado received his first taste of professional ball with the AZL White Sox later that season. Not surprisingly, he struggled with the speed of the game and slashed just .233/.309/.301 in 38 games with four doubles, one triple, one homer, 22 RBIs, four stolen bases, nine walks (6.0%) and 40 strikeouts (26.7%).

In 2019 with Great Falls, Delgado turned in a much better season as he slashed .274/.325/.377 in 57 games with 14 doubles, one triple, two homers, 32 RBIs, one stolen base, 14 walks (6.0%) and 87 strikeouts (37.5%). However, there are obvious concerns regarding his high strikeout totals. Many scouts believe that, in part because of his size, he makes a better fit as a third baseman. If he does end up switching positions, he’ll eventually need to tap into his above-average power. Delgado does have a long swing, so with extra work and a few adjustments, it is hoped that he could indeed become much closer to reaching his full potential — Delgado is still only 20, after all. It seems likely that he’ll begin next season with Kannapolis.

Unexpectedly, Comas struggled with Great Falls in 2019. In 54 games and 194 at-bats with the Voyagers, he slashed just .222/.251/.351 with seven doubles, six triples, two homers, 33 RBIs, seven walks (3.4%) and 58 strikeouts (28.6%). According to FanGraphs last year, Comas’ swing had gotten “disconcertingly long” which could explain his struggles. For someone as lanky as Comas is, that evaluation makes sense. Provided he can make adjustments, Comas has the potential to gradually move up the system. Because of his relatively limited range, he really profiles as a corner outfielder. He’d have to hit better in order to fit that profile, however, so it wouldn’t be a bad idea to see him return to Great Falls to hone that swing a bit.

Progression: Maldonado’s varied skills have found him moving through the system with his bat yet untracked. (Phrake Photography/South Side Hit Pen)

Kelvin Maldonado played varsity ball in his native Puerto Rico, at the Puerto Rico Baseball Academy. Upon being selected in the 11th round of the 2018 draft, he had major difficulties in adjusting to professional pitching. In 2018 with the White Sox AZL squad, Maldonado slashed just .150/.184/.167 in 38 games with one triple, four walks (3.1%) and 31 strikeouts (24.2%).

While Maldonado hit much better in 2019 with Great Falls, he still had difficulties with drawing walks. In 58 games totaling 229 at-bats with the Voyagers, he slashed .253/.288/.310 with 11 doubles, one triple, 17 RBIs, two stolen bases, nine walks (3.7%) and 55 strikeouts (22.8%). While Maldonado runs the 60-yard-dash in 6.54 seconds according to PerfectGame, his speed hasn’t yet translated to stolen bases. Defensively, it was noted by PerfectGame that he has light feet and smooth, balanced footwork, easy athletic actions, a quick release and the ability to makes accurate throws consistently. The site likes his potential, though he tends to get too mechanical with his swing.

Look for Maldonado to be in consideration for a promotion at some point in 2020 to Kannapolis.

Rough patch: Though still young, Curbelo’s demotion in 2019 should be a wake-up call. (Tiffany Wintz/South Side Hit Pen)

Born in Puerto Rico, Luis Curbelo moved to Florida for his senior year of high school. Before moving, however, he played for the Puerto Rico Baseball Academy, whose most famous alumnus is Carlos Correa. At the time of the 2016 draft, Baseball America said Curbelo “is a physical infielder with promising power potential. He has plenty of strength and produces good bat speed, enabling him to drive the ball out of the park. He has a balanced swing and does a good job of getting to his power. Curbelo is a below-average runner, limiting his range up the middle. He has good hands and a strong arm, giving him a good chance to settle at third base as a professional.”

After a terrific three-game start in 2017 with Great Falls, Curbelo tore his meniscus and missed a year of development time. He struggled a bit with Kannapolis the following year, which wasn’t a huge surprise as he was about 16 months younger on average than his competitors. For the year in 83 games spanning 317 at-bats, Curbelo slashed .237/.282/.338 with 19 doubles, two triples, three homers, 31 RBIs, 18 walks (5.2%) and 87 strikeouts (25.4%).

Expect Curbelo to begin 2020 with Kannapolis, with a chance for promotion to Winston-Salem by the end of the year if he can indeed make more contact. 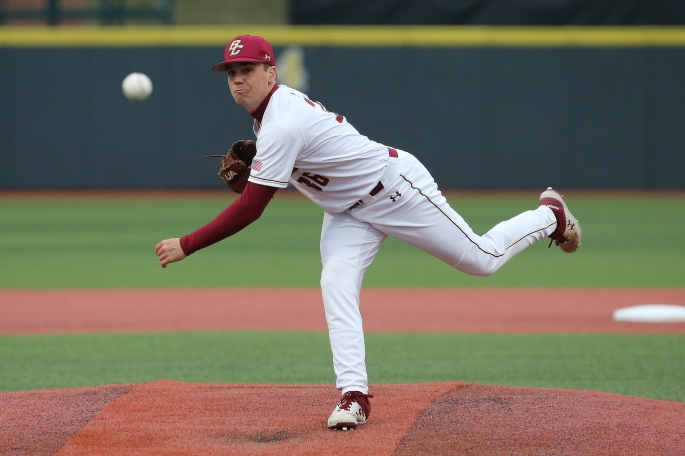 Because of his diminutive size, and also because he doesn’t have top-notch stuff, Metzdorf was expected to be drafted much later. However, Metzdorf was selected in the fifth round of this year’s draft for the same reason Avery Weems was selected in the sixth — signability. Metzdorf received a $10,000 signing bonus from the White Sox, which was around $384,000 less than slot value (which aided the Sox in signing Matthew Thompson and Andrew Dalquist).

Metzdorf, because of his better college credentials, started the season with Great Falls and acquitted himself quite nicely. In 14 starts spanning 40 innings (the White Sox don’t usually extend their starters too much in their first pro seasons) for the Voyagers, he posted a 3.60 ERA and 1.30 WHIP by ceding 44 hits (.286 OBA) and eight walks (4.8%) while striking out 36 (21.4%). Despite giving up some hits, Metzdorf limited the damage by keeping the ball down (55.1% ground ball rate) and throwing strikes.

Baseball America’s scouting report says “Metzdorf’s stuff isn’t huge, but he’s a solid strike thrower and has a fastball that sits 86-89 mostly, though he did ratchet that up to 93 late in the season. His slider and changeup are both fringe-average pitches at best.” Metzdorf is definitely undersized, so questions about his durability as a starter may persist for the next couple of years as a result. He’s also a year older than Weems, so if Metzdorf performs well at Kannapolis next year, he could earn a quick promotion to Winston-Salem.

Clubber special: If Abbott can add a bit better contact to his power, he could climb the ladder quickly. (@MiLB)

A three-time state MVP in water polo at Curtis High School in University Place, Wash., Abbott had a partial scholarship to stay on that path at Long Beach State. But in the spring of 2017 — the spring he thought would be his last for competitive baseball — he batted .438 (21-for-61) with eight doubles, two home runs and 18 RBIs to earn an eighth round draft selection by the White Sox. That year with the AZL White Sox, he got off to a good start and showed good patience at the plate. However, he struggled making contact, which caused him to slash just .225/.344/.275 with 17 walks (13.8%) and 38 strikeouts (30.9%) in 102 at-bats.

It may be between Harvin Mendoza and Abbott as to who earns a promotion to Kannapolis for 1B/DH duties. While Abbott has the better power potential, Mendoza is more likely to win that promotion due to being a more polished hitter. Even if Abbott returns to Great Falls to begin the 2020 season, he likely will end the year with Kannapolis. 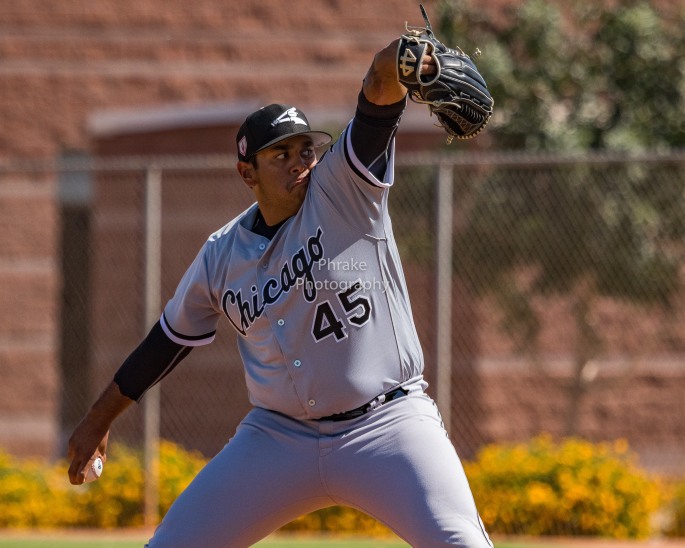 Trail- and fastball-blazing: Patel is one of many promising arms drafted in 2019 by the White Sox. (Phrake Photography/South Side Hit Pen)

Patel improved in each of his four years for the University of Texas-San Antonio. In 2019 for the Roadrunners in 14 starts spanning 89 innings, Patel provided the UTSA with a rock-solid 2.82 ERA and 1.24 WHIP by relinquishing just 78 hits and 33 walks while striking out a school-record 102. Patel made history when the White Sox selected him in the seventh round of the MLB draft, as he became the first player of Indian origin (and perhaps the only drafted player who happens to be a national-team level cricket player) to ever be drafted.

It’s possible Patel could begin next year in the rotation — especially if he offers another plus pitch in his arsenal. Patel should be a lock to be a part of next year’s Kannapolis pitching staff.