It’s been a challenge, running separate White Sox sites for about eight months now. One of the downfalls is not being able to be in two places at one time.

So what should have been a timely obit early Thursday here, now turns into a Friday memoriam. And though I wrote on the passing of Ed Farmer at age 70 over at South Side Sox already and there is sure to be overlap, we can’t go without acknowledging the man who, with nearly three decades in the radio booth on the South Side, was a voice of a generation.

Not every game can we pass sitting in a man cave, corner bar or family den, sitting back with a beverage and pausing-rewinding unbelievable plays. Many of us are stuck on the road, or at work, or otherwise on the move and in desperate need of the trusted companion that is White Sox baseball on the radio.

And that’s just what Ed Farmer was to any of us who had a habit of listening to the game. His career in Chicago not only fairly well mirrored Hawk Harrelson’s, but the two had striking similarities. They both filled that rare role of color men in play-by-play shoes. And while Hawk steered toward intentional, and for a long time wildly entertaining, bombast, Farmio often struck a similar tone, more quietly. His was a sort of muted hyperbole.

He and longtime radio parter Darrin Jackson were well-matched. Both understated broadcasters, still willing to cut through the bull and lend a former player’s eye to the action.

It’s neither a surprise that DJ was loving in his tribute to Ed:

“My heart is broken, but my mind is at peace knowing my dear friend is no longer suffering,” Jackson said, in a team statement. “Ed was a competitor who also was everyone’s best friend. I saw firsthand how hard Ed fought each and every day and season after season to keep himself healthy and prepared to broadcast White Sox baseball. I first got to know Ed during my time in Chicago as a player and am honored to have been his friend and radio partner. My heart goes out to [wife] Barbara and [daughter] Shanda, the only people he loved more than the White Sox and his hometown of Chicago.”

Nor that his voice seemed to be cracking in his remarks to White Sox media on Thursday:

Many fans, friends and colleagues wrote and tweeted about Farmer yesterday, as the news sunk in that the radio voice of the White Sox was gone. And so many new him better than me. But still, on the beat even for a brief time, all of the regulars get close. I marched right into the TV booth well before one of my first games to tell the Hawk what a profound influence he was on me as a fan, and a writer. Steve Stone was (and I presume still is) a conspiratorial character on the road, taking time to chat after every game with writers and even fans, asking the temperature of the room before always giving you his take — the right one. DJ was sympathetic and caring, checking in, offering support, slowing down to stride alongside and put a new guy at ease. Heck, I even got to fulfill a childhood dream of holding court with Wimpy: Catching some trouble, and doling some out, too.

Farmer was a bit different from all of them. A man’s man, sure, like most ex-athletes, but yet very soft, surprisingly vulnerable. Losing parents very young (38 and 41) will do that — as will flying through the windshield of a car that crumpled your bike in the middle of a pro baseball career, or being yoked by a lifelong disease that you understand will likely kill you one day. For a prep phenom, major leaguer at 21, All-Star, beloved broadcaster, Farmio had seen some shit.

And he’ll tell you, bombastic or barely audible both. When the Notre Dame volume went up, I tuned out and went to see which classic artist Omar Vizquel was studying on this particular road trip. But when approached with a question about his career, or a game situation that had me puzzled, Farmer was thoughtful and measured, unfailingly precise in his assessments. He downplayed his own greatness, whether as a promising hoops star or a guy (then) among the Top 200 in all-time saves — just so long as you clearly did know his place in the game.

By listening to him on a broadcast, you would not have thought that gentility was his personal brand. But behind the man behind the mic, and even stitched into some of his best broadcasts on a repeat listen, it’s there.

And while even those of us who came to depend on the radio to connect us to our White Sox may tend to understate the medium’s importance, and that of its purveyors, Farmer made a mark:

“Ed Farmer was the radio voice of the Chicago White Sox for three decades, and he called no-hitters, perfect games and of course, a World Series championship,” White Sox chairman Jerry Reinsdorf said in a team statement. “His experience as a major league All-Star pitcher, his wry sense of clubhouse humor, his love of baseball and his passion for the White Sox combined to make White Sox radio broadcasts the sound of summer for millions of fans. Ed grew up a Sox fan on the South Side of Chicago and his allegiance showed every single night on the radio as he welcomed his ‘friends’ to the broadcast. I am truly devastated by the loss of my friend.”

He was a hometown boy made good, and through his own goodness planted roots here after his playing career dissolved into what-ifs and tall tales.

And what’s great, in its own painful way, is that even in death, we never stop learning about these men we watched, listened to, and admired. I was today years old when I found out that Basketball Hall of Fame GM Jerry Krause didn’t just lobby the White Sox to acquire Farmer in 1979 (they listened), but that Krause was the original scout to sign him for Cleveland.

Just like Farmer’s playing career was largely overshadowed by the stars of the starting rotation and pen, there were more colorful, even stronger, broadcasters in town during Farmer’s career. But he cared deeply for our team, and that affection bled through his announcing work. It’s not for nothing that some of the best highlights from 2005, or for any White Sox season stretching back almost three decades, feature Farmer’s voice on the soundtrack.

Today, the White Sox put it perfectly, with a wonderful tribute:

In honor of one of Farmio's most famous calls, we (virtually) light it up one more time for him. pic.twitter.com/kxRvGkFaaW

As I said over at SSS, White Sox fandom will miss you dearly, Ed.

Donations may be made in Farmer’s name to the Polycystic Kidney Disease Research Foundation (support.pkdcure.org). 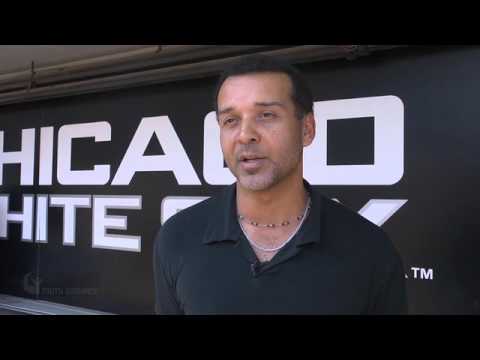 1993
As part of an effort to replace Ellis Burks, White Sox GM Ron Schueler inked journeyman outfielder Darrin Jackson to a contract. D.J. would replace Burks just fine with 10 homers, 51 RBIs, seven stolen bases and a .312 average in the shortened 1994 season. He moved into the team’s broadcasting booth years later, first on TV, then radio.