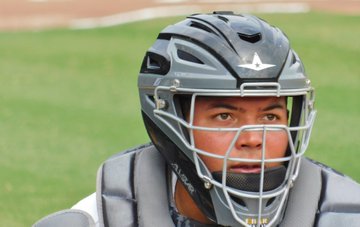 Solid state: Perez boasts solid defense and possible offensive pop, so keep an eye on him in 2020. (Tiffany Wintz/South Side Hit Pen)

The 2016 season saw Perez struggle, which is not an uncommon occurrence for someone playing Stateside for the first time. Combined with the AZL White Sox, Great Falls and Kannapolis in 34 games totaling 116 at-bats, Perez slashed just .198/.218/.259 with four doubles, a homer, 14 RBIs, three walks (2.4%) and four strikeouts (3.3%).

Perez’s calling card is his defense, as he has above-average skills behind the plate. While his arm strength is basically average, his quick release makes up for it. In 2019, Perez thwarted 41-of-105 stolen base attempts for a nifty 39.0%. He limited his passed balls to just seven, which really isn’t bad compared to others in the system. With Perez’s lack of power offset by plus ability to make contact combined with his defense (as arguably the best defensive catcher in the system), Perez may still have future as a backup catcher in the majors. Look for Perez to begin the 2020 season with Birmingham. 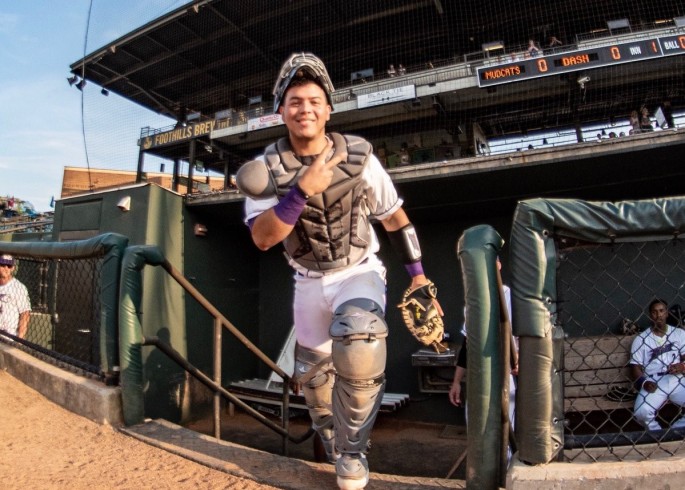 Picky, picky: Carlos Perez struck out just 7.6% of the time for the Dash in 2019, while gunning down 39% of all would-be basestealers. (@WSDashBaseball)

“Deep Dive” focuses on the depth of each position in the Chicago White Sox organization. Each position is broken into a five-part series:

Carlos Perez is the only one of these A-level players who is considered to be a plus defender. Unfortunately, while there is offensive potential in all of the A-ball players, they weren’t able to show it consistently in 2019. As a result, their defensive liabilities became even more exaggerated. As of right now, Perez seems the likeliest of the four to reach at the majors — although that is considered iffy at best.

Perez’s calling card is his defense, as he has above-average skills behind the plate. While his arm strength is basically average, his quick release makes up for it. This year for the Dash, Perez thwarted 41-of-105 stolen base attempts for a nifty 39.0%. He limited his passed balls to just seven, which really isn’t bad compared to others in the system. With his lack of power but plus ability to make contact, combined with his defense (as arguably the best defensive catcher in the farm system), Perez may still have future as a backup catcher in the majors. Perez will be eligible for the upcoming Rule 5 draft, and if not selected, will likely begin the 2020 season with Birmingham.

A native of suburban Libertyville, Skoug enjoyed an impressive three-year run as the TCU backstop from 2015-17. In his junior season, he hit for much more power but at the expense of average and strikeouts. That season with the Horned Frogs, in which he shared the Big 12 Player of the Year award with Texas Tech’s Hunter Hargrove, Skoug slashed .272/.378/.544 with 11 doubles, 20 homers, 73 RBIs, 40 walks (12.8%) and 98 strikeouts (31.4%). His strikeout frequency, along with concerns about his defense, caused Skoug to fall to the seventh round of the 2017 draft.

According to MLB Pipeline in 2017, Skoug works hard behind the plate and shows admirable leadership skills. However, there are concerns with his defense due to limited athleticism and quickness. He also has fringy arm strength, but makes up for it somewhat with a quick release. This year, Skoug thwarted 25.5% of all stolen base attempts against him. Ultimately, it will be Skoug’s ability to make contact and produce offensively that will dictate how far he climbs in the organization. In the meantime, he likely will return to the Dash to begin the 2020 season.

This year was a struggle in more ways than one for Troutwine. Offensively, his numbers slipped to .240/.341/.345 in 61 games as he hit 15 doubles, two homers, 14 walks (6.0%) and 31 strikeouts (13.3%). While he scuffled with Kannapolis offensively, his struggles were much worse behind the plate. In 2018 in 34 games for the Voyagers, he committed just two passed balls; this year in 58 games as a backstop for the Intimidators Troutwine committed a whopping 23. When you add 11 errors and just a 20.8% rate throwing out basestealers, it certainly was a year that Troutwine would like to forget. It’s certainly possible that his defensive miscues took their toll on his confidence on both sides of the ball.

Expect Troutwine to return to Kannapolis for 2019, but with a chance for promotion to Winston-Salem if he significantly reduces his defensive mistakes while improving his average. On the plus side, Troutwine’s .686 OPS was the highest of the four system catchers who finished the year in A-ball.

Hickman, as a native of Katy, Texas, was selected in the 13th round by the White Sox in the 2016 draft out of Chipola Junior College. Progress through the system has been slow for Hickman, as his numbers have dropped with each year while his walks and strikeouts have gone the opposite directions.

This year for the Intimidators, he slashed just .209/.266/.353 in 215 at-bats as he hit 13 doubles, six homers, 24 RBIs, and 12 walks (5.1%) with 71 strikeouts (30.3%). On the positive side, though, he threw out would-be basestealers at an impressive rate of 39.3%. His defensive skills are considered decent, but he did surrender 10 passed balls in 48 games. Hickman spent more than 15% of his defensive time at first base, and with one error there in nine games, he gives his team a little extra versatility. Hickman will be eligible for the upcoming Rule 5 draft, but likely won’t be selected.

With two seasons with Kannapolis, it’s likely Hickman won’t spend a third there in 2020; expect him to advance to Winston-Salem ahead of Troutwine because of his defense. How far Hickman will advance beyond that, however, will largely depend upon his offensive improvement.