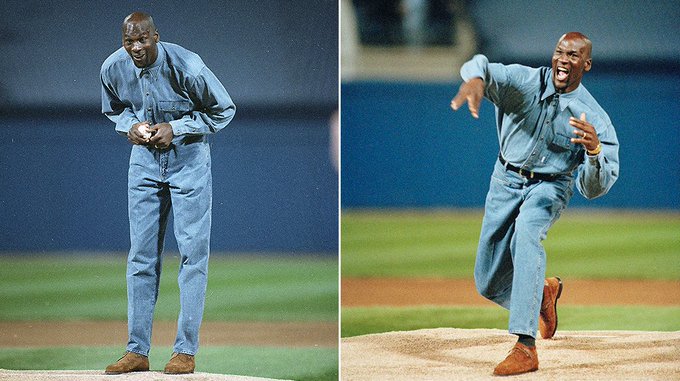 1983 — Cy Young Award winner LaMarr Hoyt pitched a brilliant, complete game six-hitter in beating the Orioles 2-1 in Game 1 of the ALCS. It was the first time since divisional playoffs started in 1969 that Baltimore had lost the first game of a postseason series. It would prove to be the high-water mark for the Sox in the next week.

1993 — Game 1 of the ALCS was a complete, unmitigated disaster both on and off the field for the White Sox. On the field, the Toronto Blue Jays ripped the Sox, 7-3, but by the middle of the game, not one fan cared. Michael Jordan, who threw out the ceremonial first pitch, confirmed reports that he was holding a press conference the next morning to announce his retirement from the Chicago Bulls. Fans at the game and around the city were in shock.

Adding insult to injury, future Hall of Fame catcher Carlton Fisk and Chicago native and former Sox pitcher Donn Pall were turned away by security guards when they attempted to wish the team good luck in the locker room before the game started. The White Sox claimed the rules were set by major league baseball but no fan or media member was fooled by that comment. Most media members felt Fisk was turned away on explicit orders from owner Jerry Reinsdorf. It was an insult Fisk never forgot.

Reinsdorf then took an unprecedented step of apologizing to the team in the clubhouse before the start of Game 2, saying he had no desire to steal their spotlight because of the Jordan situation.

2008 — Making the postseason for the third time in the decade, the White Sox were on the brink of elimination in the 2008 ALDS, but behind strong starting pitching from John Danks they beat the Rays, 5-3, to survive another day. Danks pitched into the seventh inning, with seven strikeouts. A three-run fourth inning set the tone for the Sox in the game, and narrowed Tampa Bay’s series lead to 2-1.&nbsp; 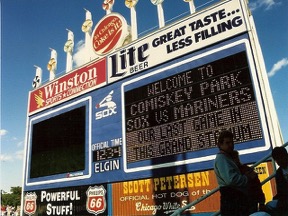 Fond farewell: Scoreboard welcoming fans to the final game at Comiskey Park in 1990.

1921 — White Sox catcher Ray Schalk tied a major league record with three assists in one inning. It happened in a 3-2 loss to Cleveland at Comiskey Park. Schalk picked off three baserunners!

1949 — White Sox GM Frank Lane started the connection between the franchise and Venezuela when he dealt two minor leaguers and $35,000 to the Brooklyn Dodgers for shortstop Alfonso Carrasquel.

“Chico” would be named to three All-Star teams and would become the first Venezuelan to appear in the midseason classic. He’d be traded before the start of the 1956 season, to Cleveland for Larry Doby, which opened up the position for another Venezuelan, Luis Aparicio.

1956 — In the season-ending game at Kansas City, Sox pitcher Jim Derrington became the youngest person to ever appear in a game wearing a White Sox uniform. Derrington was 16 years old when he started against the A’s. He went six innings, allowing six runs (five earned) in a 7-6 loss. The teenaged lefty (who was a “bonus baby”) didn’t last long in the big leagues. He pitched a total of 21 innings in the majors, and had a career record of 0-2.

1966 — The White Sox defeated the New York Yankees 6-5 in 11 innings, on a single to left by Johnny Romano. It scored Wayne Causey. Why was that important? The loss guaranteed the Yankees a last-place finish, for the first time since 1912.

1971 — When Bill Melton smashed a home run on the last day of the season off the Bill Parsons of the Milwaukee Brewers, he became the first White Sox player to ever win a home run championship. Melton hit three home runs in the final two games to pass Norm Cash and Reggie Jackson for the title. Typically for a White Sox slugger, Melton only hit 33, the lowest total for a champ since 1965.

In an effort to give Melton an additional at-bat or two, manager Chuck Tanner had the power hitter leading off in the Sox final two games.

1980 — For all of his contributions to baseball and to the White Sox organization, owner Bill Veeck was honored with his own night. The ceremonies took place before the White Sox would drop a 5-1 decision to Oakland.

1990 — Eighty years of baseball history ended, as the original Comiskey Park closed with a 2-1 White Sox win over the Seattle Mariners. An emotional and capacity crowd, including politicians, musicians, sports and Hollywood figures, were in attendance.

Among the celebrities in the park were Governor Jim Thompson, Major Richard M. Daley, Goldie Hawn, Kurt Russell, Ron Howard, George Wendt, John Candy, Wayne Gretzky, Billy Cunningham and Maureen O’ Hara. The Oak Ridge Boys sang the National Anthem and the rock group Styx sung “Take Me Out to the Ballgame” during the seventh inning. Bobby Thigpen got his 57th save in the game. The Sox would close out a miraculous 1990 season with 94 wins.

1997 — After controversies on and off the field (calling for a relief pitcher with no one warming up, a fistfight with umpire Richie Garcia at a steakhouse, a brawl near third base with Brewers manager Phil Garner) manager Terry Bevington was fired. No flowers were sent and no Sox fan (or player) shed any tears.

2000 — White Sox infielder José Valentin became the fourth player in franchise history to hit home runs from both sides of the plate in the same game. Valentin connected off Kansas City’s Blake Stein and Scott Mullen, driving in three runs in the 9-1 win. This had only happened six times in franchise history, and Valentin did it three times himself! Also, this feat happened three times against the Kansas City Royals.

2008 — For the first time, the White Sox played an extra game to get into the postseason. They hosted the Twins in the 163rd contest of the year (known as the “Blackout Game”) and won 1-0, clinching the Central Division title. John Danks threw eight shutout innings, Jim Thome belted what turned out to be the game-winning home run and Ken Griffey Jr. threw out Michael Cuddyer at home. The Sox won the division with a record of 89-74.

2016 — White Sox left hander Carlos Rodón tied the franchise and American League record by striking out the first seven Minnesota Twins hitters, in a game at U.S. Cellular Field. The original record was set by White Sox hurler Joe Cowley back in 1986 at Texas. Unlike Cowley, though, Rodón actually won his game, 7-3. Rodón struck out 11 on the night, pitching eight innings.

(White never threw a no-hitter, by the way.)

He also threw one-hitters against the St. Louis Browns in 1904, Philadelphia Athletics and Browns in 1906, and Washington Senators in 1908. In addition to being a great pitcher, White was also a dentist and an evangelist.

Sept. 6, 1905 — White Sox pitcher Frank Smith tossed a no-hitter at the Detroit Tigers. The Sox won that game easily, 15-0, and also won the second game of the twin bill by shutout. Smith would throw a second no-hitter in 1908, and also had three one-hitters between 1905 and 1910.

Sept. 6, 1971 — Sox pitcher Steve Kealey belted a three-run, eighth-inning home run at Comiskey Park off of the Minnesota Twins’ Ray Corbin. The clout helped the Sox to a 6-3 win. It would be the last time a Sox pitcher homered in a game at Comiskey Park. Kealey also picked up the save in the same game.

Sept. 6, 1981 — It was the beginning of the end for broadcaster Jimmy Piersall in connection with the White Sox. Piersall and Harry Caray appeared on the “The Mike Royko Show” on WLS-TV. Royko asked the duo how they handle baseball wives who disliked the comments they made about their husbands. Caray said, “You know what, Mike? I would love to call all the wives together someday and tell them what their husbands say about them across the ballfield.” Piersall’s answer was more controversial, to say the least: “First of all, they were horny broads that wanted to get married, and they wanted a little money, a little security and a big strong ballplayer. I traveled, I played. I got a load of those broads, too.”

Sept. 6, 1999 — In a doubleheader at Texas, manager Jerry Manuel and star DH Frank Thomas got into an argument after Thomas refused to pinch-hit in the nightcap. Manuel was livid, and sent Thomas back to Chicago. It was discovered after examination by team doctors that Thomas saying he was hurt rang true: They found a bone spur the size of a walnut on the outside of his ankle, which required surgery and ended his season.

Sept. 6, 2008 – The White Sox and Angels battled at U.S. Cellular Field for almost four hours in the middle of a pennant race, and played 15 innings to boot. That’s when Jim Thome blasted a monstrous home run deep into the right-field bleachers to end the game with a 7-6 White Sox win. The contest set the record for the longest game (by innings) ever played in September by two teams both in first place at the time. The home run was Thome’s 30th on the season.