In a phenomenal show of support and cohesion, a record five players were elected to the South Side Hit Pen White Sox Hall of Fame for 2020.

By virtue of everyone on the ballot getting at least one vote, nobody drops off for that reason next season. In 2021, five new players will enter the ballot, including José Abreu.

Here are the results of the other elections within the third annual Hall of Fame vote: 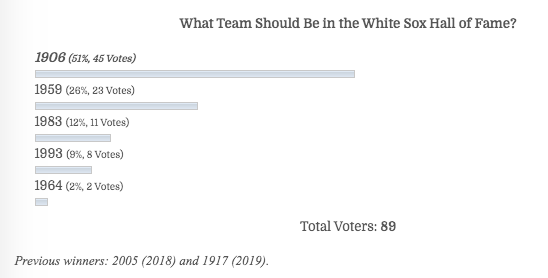 Pat Seerey has done very poorly in his two stints in the “moment” vote — and is so disrespected that the amateur White Sox historian who compiles these Hall of Fame articles couldn’t even spell his name right on the ballot (OK, so it might have been like 4 a.m.) — so it might be time to remove him from future voting.

Next year, we’ll have another full slate of players eligible for enshrinement, plus these additional categories. Some of the above will sit a year out in an every-other frequency, and perhaps we’ll even invented a new category or two (suggestions are welcome in the comments, as always).

Thanks to all who participated — you’re the ones who make this all a lot of fun! And stay tuned, because at long last our first South Side Hit Pen White Sox Hall of Fame “plaque” will be published on these pages. We’ll continue to unveil our “plaques” to all winners, throughout the year.

Actor (final credit: murdered by Albert Einstein in "Carnage Hall"), musician (Ethnocentric Republicans), and Nerf hoops champion, Wiffleball aficionado and onetime bilingual kindergarten teacher, Brett Ballantini also writes about baseball, basketball and sometimes hockey, publishing at the NBA, MLB, NHL, and for Slam, Hoop, Sporting News, the Athletic, and others. He was CSN Chicago’s Blackhawks beat writer for their first Stanley Cup season of 2009-10, and took over the White Sox beat after that. He currently is the editor-in-chief of South Side Hit Pen and managing editor of SB Nation's South Side Sox. He also wrote a book about Ozzie Guillén but is running out of space, so follow him on Twitter @BrettBallantini and he'll probably tell you even more about himself than you ever wanted to know. View all posts by Brett Ballantini

2 thoughts on “Five White Sox are elected to the South Side Hit Pen Hall of Fame!”